This was a kickoff event to the 2021 Centenary College Research Conference.

Audrey Stone is an Assistant Professor and the Director of the Autonomic Control of Circulation Laboratory at the University of Texas at Austin. She received her Ph.D. in Kinesiology from the University of Arkansas in Fayetteville and completed her postdoctoral fellowship in the Heart and Vascular Institute at the Pennsylvania State College of Medicine. Dr. Stone’s research interests focus on the autonomic control of circulation during exercise in health and disease. Her current research projects investigate the exaggerated cardiovascular responses evoked by exercise in those with type 1 and type 2 diabetes using rodent models. Her type 2 diabetes project is currently funded by an R01 at NHLBI. Dr. Stone is active in Graduate Women in Science (GWIS) and is a member of the Women in Physiology committee for the American Physiological Society. She and her wife have a one year old daughter who motivates them to keep investing in the future of women in science.

Darby Proctor is an Assistant Professor of Psychology at the Florida Institute of Technology in the School of Psychology. She received her Ph.D. from Georgia State University. In her research, she looks for the evolutionary origins of decision-making biases in nonhuman primates. She is particularly interested in how decision-making processes are influenced by the social dynamics within groups. Currently, she is researching a number of topics within behavioral economics with the animals housed at the Brevard Zoo. She also teaches courses in the animal behavior concentration for psychology undergraduates. 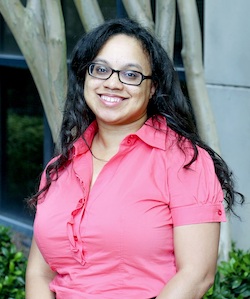 Charity J. Morgan earned a BA in Mathematics from Washington University in St. Louis in 2003 and a PhD in Statistics from Harvard University in 2008. She is an Associate Professor in the Department of Biostatistics at the University of Alabama at Birmingham. She has collaborated on projects in a variety of scientific fields, including psychology, neurology, cardiology and anesthesiology. Since 2017, she has chaired the selection committee for UAB School of Public Health’s Janet L. Norwood Award for Outstanding Achievement by a Woman in the Statistical Sciences.

Notice of Nondiscriminatory Policy As To Students The insitution does not discriminate in its educational and employment policies against any person on the basis of gender, race, color, religion, age, disability, sexual orientation, national or ethnic origin, or on any other basis proscribed by federal, state, or local law.