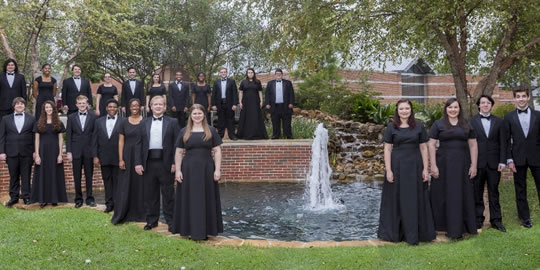 Camerata, founded in 1983, is the select chamber choir from the Hurley School of Music. This SATB group of 24 singers is dedicated to quality artistic performances of choral repertoire from all historical periods to the highest musical standards. The composition of the group is primarily voice majors, though membership is open to all Centenary students by audition.

Camerata presented an Ensemble Debut Concert at Carnegie Hall in 2007 and was one of nine featured choirs at the National Collegiate Choral Organization Conference at Yale University in 2009. They have been invited to perform as a featured choir at the Southern Division Convention of the Music Educators National Conference, the Spivey Hall Educational Concert Series, and the Louisiana Conference of the American Choral Directors Association.

Centenary College Choir is the primary touring choral ensemble and musical ambassador for Centenary College. Established in 1941, the Choir is the oldest and largest ensemble at Centenary College, made up of 55-65 singers. The group sings a diverse repertoire of music, from classical to casual, making an international tour every other year. Nicknamed "America's Singing Ambassadors" by the press, the Choir has toured throughout the world, bringing the name of Centenary College to audiences in 32 countries on 6 continents. The Choir is well-known for its engaging visual and aural appeal, and for its heart-felt connections to audiences. The group makes two weekend tours each semester and a longer tour in January, in addition to traditional performances such as the Easter Sunrise Service at Hodges' Gardens in Many, Louisiana, and choral major works with orchestra. Despite an extensive performance schedule, Choir students miss very few classes. The group has the high distinction of having performed seven times at the White House, two lengthy engagements at Radio City Music Hall, for American Choral Directors and International Lions Club conventions, for numerous conferences of the United Methodist Church, at famed cathedrals such as Notre Dame in Paris and St. Peters in Rome, and in renowned concert venues such as the Sydney Opera House.

Membership in the Centenary College Choir is by audition only. The group is made up of both music majors and non-majors, and thrives under a vibrant system of teamwork and student leadership.

The Singers' Workshop develops students’ dramatic skills and stagecraft, and prepares them for building a performance career. This course concentrates on honing solo and ensemble performance, as well as career skills required for success in the fields of opera, musical theater, and recital work. The students will work on character development, movement, managing performance anxiety, professionalism, marketing and branding, as well as role preparation. Ensemble members also have the opportunity to work with guest artists through workshops, seminars, and masterclasses.

Students have many performance opportunities, including a fall concert or scenes program, and a full production in the spring. Recent past productions include Susannah, The Putnam County Spelling Bee, and Prince Orlovsky's Ball, and Yeltsin in Texas! In Fall 2022, Singers' Workshop will present Menotti's The Telephone. 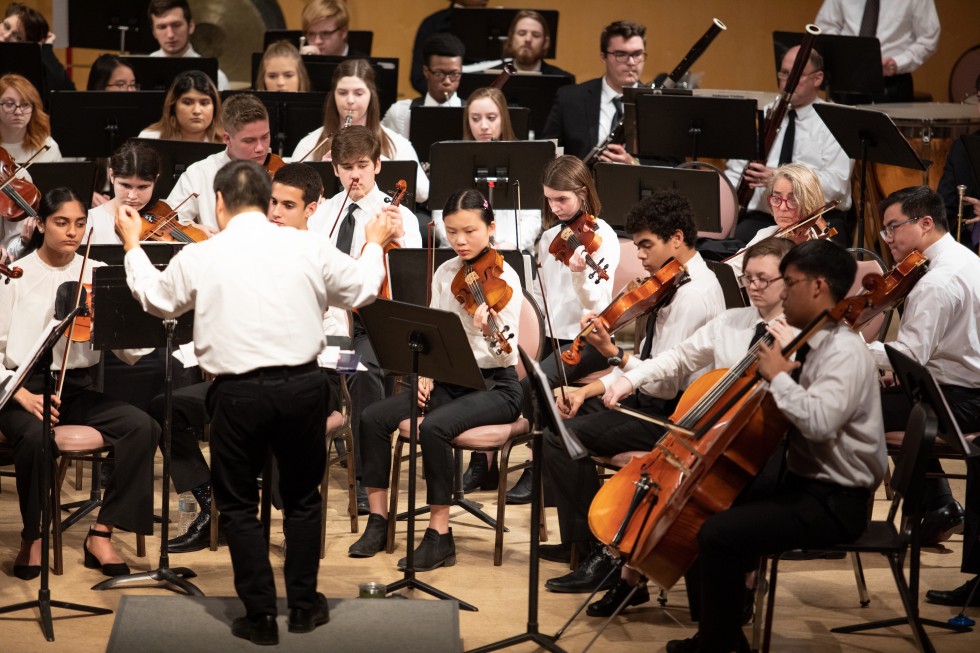 The Hurley Orchestra plays in collaboration with the Centenary Youth Orchestra. The combined orchestra has enjoyed two successful seasons, starting in 2014 with concerts featuring Shreveport natives Marcus Rose, viola, and John-Henry Crawford, cello. Crawford recently was one of 25 cellists to advance to the official first round of the prestigious 2015 Tchaikovsky International Competition in Moscow. The fall 2015-2016 season concert featured Centenary alumna Cara Lamb in Mozart’s Piano Concerto no. 24 in c minor, K.491. The spring 2016 concert program contained Bach: Air from Suite No. 3 in D Major, Beethoven’s Symphony No. 1 in C Major, op.21, and the winners of the Centenary College 2015 Concerto & Aria Competition. The ensemble is open by audition to all wind and string players.

The Centenary Wind Ensemble (CWE) is open to all Centenary students, faculty, staff, and alumni. Music and non-music majors gain valuable experience playing alongside area professionals and skilled amateur musicians who volunteer time to enrich the caliber of this group. CWE tackles repertoire from traditional marches to orchestral transcriptions and film scores to well-respected band literature. Each year, the CWE offers a number of performances, including performances each semester in the Hargrove Memorial Amphitheater where outdoor concerts have been a tradition since the 1950s. You can also hear the CWE in concert in the Hurley School of Music’s Anderson Auditorium and at yearly commencement ceremonies. 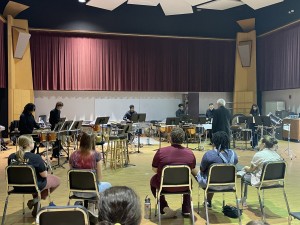 The Percussion Ensemble is made up of both majors and non-majors. They perform two concerts a year in a variety of musical genres.