Join us for an exciting season of theater at Centenary College!

Godzoola: An Evening of One-Act Plays 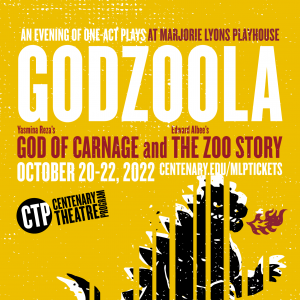 The season opens October 20 with “Godzoola: An Evening of One-Acts,” a double bill of plays set in New York City. Charlie Roppolo ’22, a CTP alumnus, directs Yasmina Reza’s Tony Award-winning God of Carnage, while John Gayle takes on Edward Albee’s The Zoo Story. From God of Carnage, which a New York Times reviewer described as, “a study in the tension between civilized surface and savage instinct,” to the provocative and suspenseful interaction between two strangers depicted in The Zoo Story, these short plays illuminate and dissect the human condition. “Godzoola: Evening of One-Acts” will be performed on October 20, 21, and 22 at 7:30 p.m. and October 23 at 2:00 p.m.

An Enemy of the People
By Henrik Ibsen, adapted by Arthur Miller
Directed by Logan Sledge
October 3-6, 2019

Peter and the Starcatcher
Presented with The Stage Center
March 2022